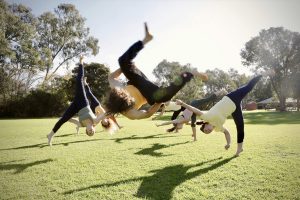 2019 Festival On Sale The Flying Fruit Fly Circus is delighted to announce that the 2019 Borderville Circus Festival is now on sale!

Borderville Circus Festival, Albury-Wodonga’s summer celebration of circus for families is back in 2019, with a special anniversary program celebrating 40 years of the Flying Fruit Fly Circus.

Since 1979 the Flying Fruit Fly Circus has been backflipping and tumbling into people’s hearts all around Australia and the world.

Across four days in December, families can enjoy spectacular circus with the entire Fruities ensemble performing in Back in the Big Top. The weekend will include open workshops for kids wanting to try out circus, a documentary screening at Regent Cinema, and a cabaret spectacular with alumni from around the world coming back to Albury-Wodonga to perform for one special night under the big top again.

Founded in the International Year of the Child by the Murray River Performing Group, the Flying Fruit Fly Circus began as a summer workshop series for kids on the Border. These kids performed in a big top tent on Hovell Tree Reserve to complete the workshops and named the show The Flying Fruit Fly Circus as a nod to the customs officers that used to check for fruit as you crossed the Murray River. Since then, the company hasbecome a full time circus training institution and performing arts company, and has performed internationally in Canada, the UK, New Zealand, Turkey and more, and toured across regional Australia.